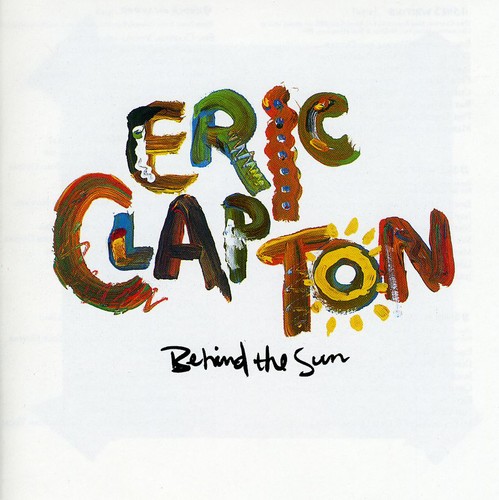 Behind the Sun
Artist: Eric Clapton
Format: CD
New: Not in stock
Wish

Producer Phil Collins helped Clapton crack the Top 40 with this 1985 LP. Clapton scored hits with Forever Man and See What Love Can Do and lays down stellar guitar throughout (as on Same Old Blues).

''Behind the Sun'' is a 1985 album by the English guitarist Eric Clapton. The title of the album comes from a line from Albert King's "Louisiana Blues". It is also Clapton's first collaborative project with Phil Collins. Often referred to as his "comeback album", it was received very well in both the UK and the US. After nearly a decade of Clapton's guitar playing taking a back seat to his singing/songwriting, this album featured some of his best guitar playing since the Cream era of the 1960s. The single ''Forever Man'' features Clapton playing an amazing guitar solo at full force. The video for ''Forever Man'' became an MTV favourite, featuring an accident where one of the cameras falls off the dolly. The album is also dressed up with synthesizers and drum machines played by Phil Collins, Ted Templeman, Peter Robinson, Michael Omartian, James Newton Howard, Chris Stainton and Greg Phillinganes, as well as Clapton's Roland guitar synthesizer on the 9th track, ''Never Make You Cry''. Bassists Donald Duck Dunn from Booker T. & the MG's and Nathan East from the smooth jazz quartet Fourplay also played on the sessions.

In his autobiography, Clapton remembers the 1984 session pleasantly: "The whole thing is going so great, I hope it never stops." However, his troubled marriage with Pattie Boyd became the subject matter for most of his original material: ''She's Waiting'', ''Same Old Blues'' and ''Just Like a Prisoner'' all contain extended guitar solos by Clapton. It was during this period that Pattie left him "and it was eventually decided that we should have a trial separation." Clapton assuaged his pain by writing the song ''Behind the Sun'' featuring only his guitar & vocals and Phil Collins' synthesizer, which became the final song on the album.

This was also Clapton's first collaboration with songwriter Jerry Lynn Williams. In response to Van Morrison being dropped from Warner Bros. Records, Clapton wanted the album to have more hit single material: “They sent me three songs by a Texas songwriter – ''Forever Man'', ''Something's Happening'' and ''See What Love Can Do'' – and they were good." The sessions featured former Toto guitarist Steve Lukather and drummer Jeff Porcaro, as well as Clapton's long-time collaborators, bassist Nathan East and keyboardist Greg Phillinganes, who officially joined Toto in 2005.

The Behind The Sun tour was also featured at the first Live Aid concert in 1985 where ''She’s Waiting'' was performed along with ''White Room'' and ''Layla''.